MANAGEMENT OF NEONATAL PIGLET AND SOW 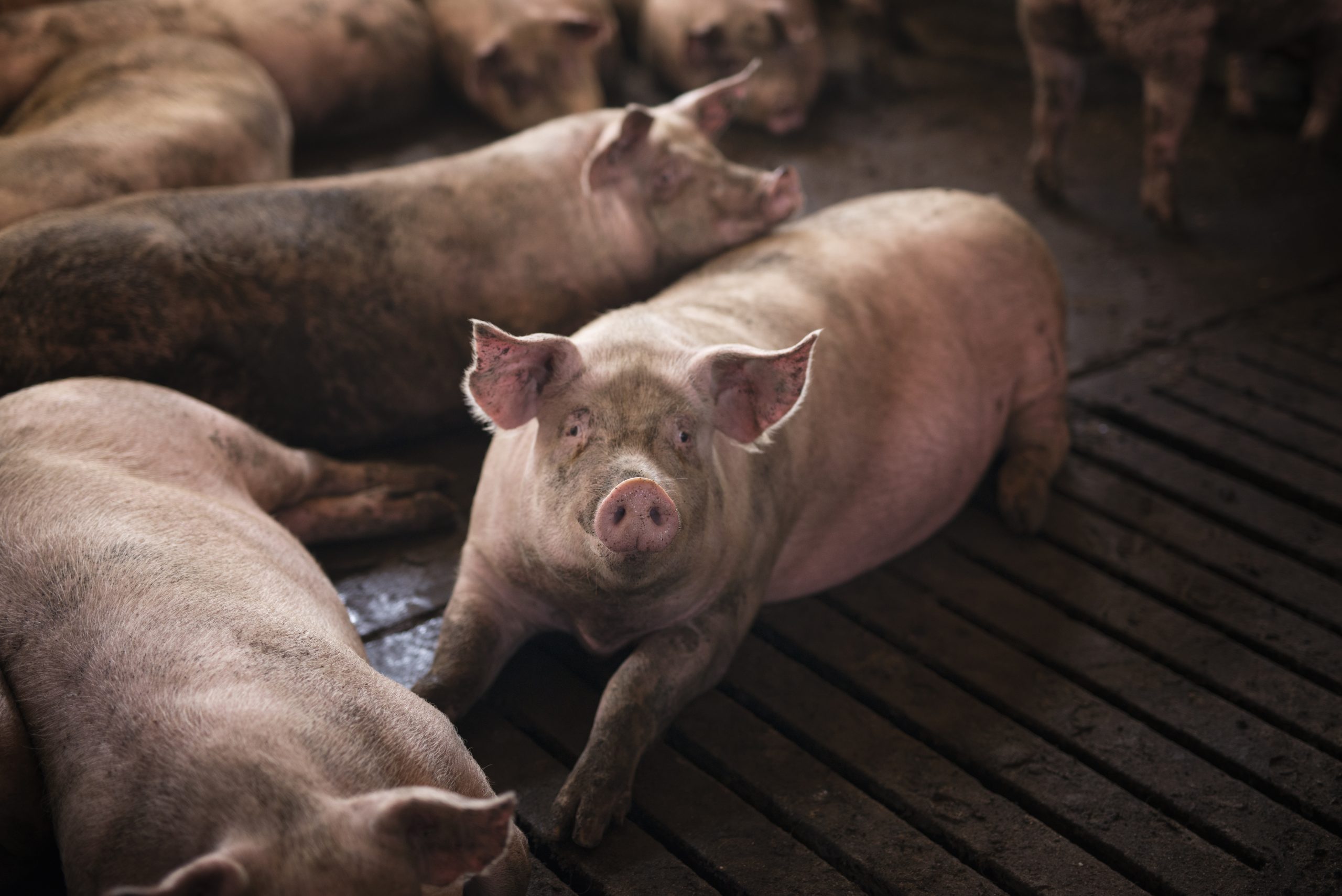 As a result of intensive breeding, litter size has considerably increased in pig production over the last three decades. This has resulted in an increase in farrowing complications. Prolonged farrowing will shorten the window for suckling colostrum and reduce the chances for high-quality colostrum intake. Studies have shown that increasing litter sizes concomitantly resulted in decreased piglet birth weight and increased within-litter birth weight variations. Birth weight, however, is one of the critical factors affecting the prognosis of colostrum intake, and piglet growth, welfare, and survival. Litters of uneven birth weight distribution will suffer and lead to increased piglet mortality before weaning. The proper management is key to handle the situation. Feeding strategies before farrowing, management routines during parturition (e.g., drying and moving piglets to the udder and cross-fostering) and feeding an energy source to piglets after birth may be beneficial management tools with large litters.

The energy requirement of newborn piglets is very high because of high physical activity and thermoregulation directly after birth. Piglets acquire energy mainly from colostrum, which is mainly composed of moisture, protein, fat and lactose. The energy content (e.g., fat and lactose) of colostrum has a major impact on short-term piglet survival during lactation. Colostrum also contains a high concentration of immunoglobulin, which is essential for piglet immune systems and thereby for their long-term survival during lactation therefore, to optimize sow colostrum yield and piglet colostrum intake, nutritional management during late gestation and lactation should be considered more carefully in large litters.

Based on the findings of high mortality in large litters, management strategies for increasing piglet survival rate should focus on strategies applicable during late gestation and before parturition and strategies applicable after birth. Before parturition, high-fibre diets seems to result in an improved farrowing process] and colostrum production and thereafter in reduced pre-weaning mortality Frequent daily meals (more than thrice daily) before farrowing are recommended for improving both the energy status and farrowing process of sows with large litters .decrease In serum glucose levels may be one of the mechanisms through which farrowing duration is prolonged.

Providing energy supplementation to small piglets by hand has also been recently studied as a means to cope with the insufficient energy intake of piglets in large litters.

Pre-mating diets are one option for stimulating follicle and oocyte development. A fibre-rich pre-mating diet before ovulation can have a positive impact on oocyte quality and maturation in the gilts. Furthermore, supplementing insulin- or IGF-1-stimulating diets (dextrose and lactose) during lactation and WEI can improve litter uniformity. Nevertheless, only a few nutritional factors have been evaluated as components of pre-mating diets. Considering that sow IGF-1 levels after weaning are positively related to pre-weaning levels pre-mating diets during the late or whole lactation period may prove effective. Optimizing sow metabolic state during lactation is also recommended. This may be done by identifying the ideal feed composition of lactation diets, such as protein and amino acids levels, especially in a hyper-prolific situation.

Large litters do not come without a catch. Increased litter size creates problems with piglet survival during lactation and sow reproduction that need addressing. Large litters only occur through increased ORs. These rates are associated with compromised follicles that appear to negatively affect early embryonic development and pregnancy-supporting mechanisms such as CL development. These impaired developments result in increased embryonic and foetal mortality. At the end of pregnancy, the process of parturition also seems tightly linked with litter size. Increased litter size prolongs the process of parturition, leaving a proportion of the litter with reduced chances for suckling high-quality colostrum for a reduced period of time under increased competition Therefore, farrowing, early lactation management procedures and late lactation nutritional management are keys to tackling the increasing problems associated with large litters. In particular, feeding strategies before farrowing can be recommended for reducing farrowing duration. For neonatal piglets, additional management routines during parturition may increase piglet colostrum intake and their survival. Nutritional management of the sow around the end of lactation, seems to be important for piglet birth weight and survival at subsequent farrowing.

Depending on the breed of pig, this can be anywhere from 4-8 weeks of age. If you have a sow that is being severely depleted by a large litter, you can wean the most independent and largest sized piglets quicker than the rest, preferably not before the 4 week mark. Weaning is important as it achieve slaughter weight more efficiently and economically, producing the ‘Full Value’ pig.. Sows producing heavier pigs at weaning have an increased feed intake and better feed conversion ratio of feed intake to piglet gain, which creates a more economical and profitable lactating sow

Adapting to new food is a complicated process for weaning piglets. What measures can be taken to ensure a smooth transition from lactating to weaned piglets?

This might sound very obvious, but it is crucial for a smooth weaning process. Healthy piglets will start eating sooner and this is the key to avoid a weaning dip. We tend to focus on solving any problem that the piglets may experience after weaning but we should not forget to look in the farrowing rooms. The problems might occur due to lack of milk production, lack of uniformity of the piglets at birth, E. coli problems, etc. Problems that start very early in the life of piglets are hard to restore later on.

Piglets hate draughts and they need warmth, the rooms need to be around 25°C. When they are moved to the nursery, the rooms should be cleaned and disinfected. Maybe even more important is to get the room dry after cleaning. This can be a problem sometimes when there is little time between cleaning and the relocation of piglets. Especially in colder climates where it is very costly to heat the rooms properly, it can be tempting to save heating costs and to put the piglets in a room that is still too wet and too cold. This is a major risk for health problems. Piglets need to spend a lot of energy to keep their body temperature high enough.

Keep piglets from the same litter together

Research has shown that mixing piglets from different litters is a huge risk factor for diseases like Actinobacillus pleuropneumoniae (App) and Streptococcus suis. Especially around weaning when they do not have a fully developed immune system and the protection of maternal antibodies decreases. When piglets are moved into the nursery, try to minimise mixing because this might enhance the spreading of diseases through the rooms. Stress due to the formation of new hierarchies will also be minimised.

The biggest challenge is to get piglets to eat after weaning. In order to achieve this they need to be trained before weaning. Tasty and fresh feed can be offered in small portions from the second week of life. The objective is to let piglets discover eating out of a bowl, so that after weaning they will easily find their new source of feed. It is advised not to change this nursery feed for the

first few days after weaning. A smooth transition will minimise the number of piglets that won’t

eat the first day(s). These hunger strikers are more likely to develop problems in the weeks that follow. If the system allows it, try to use feeding systems where all piglets can eat at the same time.

Piglets are very susceptible to infections after weaning. All necessary measures should be taken to reduce the risk of contact with pathogens. Reducing the amount of pathogens in water and feed is a good starting point. But there are more ways for a pig to get orally infected, such as contact with contaminated faeces, other pigs, etc. If you want to reduce the risk of oral infection, the best advice is to use organic acid based solutions in feed and drinking water of piglets. The organic acids will not only kilns in feed and water, but also in the stomach of the piglets.

Close Menu
Thanks for subscribing!